Plasma technology has been an important production tool for many decades in the fabrication of microelectronic devices for example. Over this period, plasma technology has also become invaluable in many other areas of industry and including automotive, medical devices, textiles, and aerospace to name but a few.

Plasma treatment is used to clean and activate surfaces to improve their adhesion characteristics. Plasma cleaning removes trace organic contamination from the surface, which would otherwise prevent good adhesion. At the same time, plasma treatment activates the surface and turns it from a low to a high surface energy state so that it becomes easily wettable by adhesives,  paint, glue etc. Plasma treatment solves problems of poor adhesion in many industries.

Plasmas have a number of unique properties that have led to such widespread application:

What is Plasma Treatment?

Plasma treatments are used to alter the surface properties of a wide range of materials to make them easier to bond, glue and paint. By treating parts we both clean and activate the surface, improving their adhesion characteristics.

It’s useful to start by defining what a plasma is. Solid, liquid and gas are the three states of matter we are all familiar with. We can move between the states by adding or removing energy (e.g. heating/cooling). If we continue to add enough energy, gas molecules will become ionised (lose one or more electrons) and so carry a net positive charge. If enough molecules are ionised to affect the overall electrical characteristics of the gas the result is called a plasma. Plasmas are, therefore, quite rightly, often referred to as the fourth state of matter. 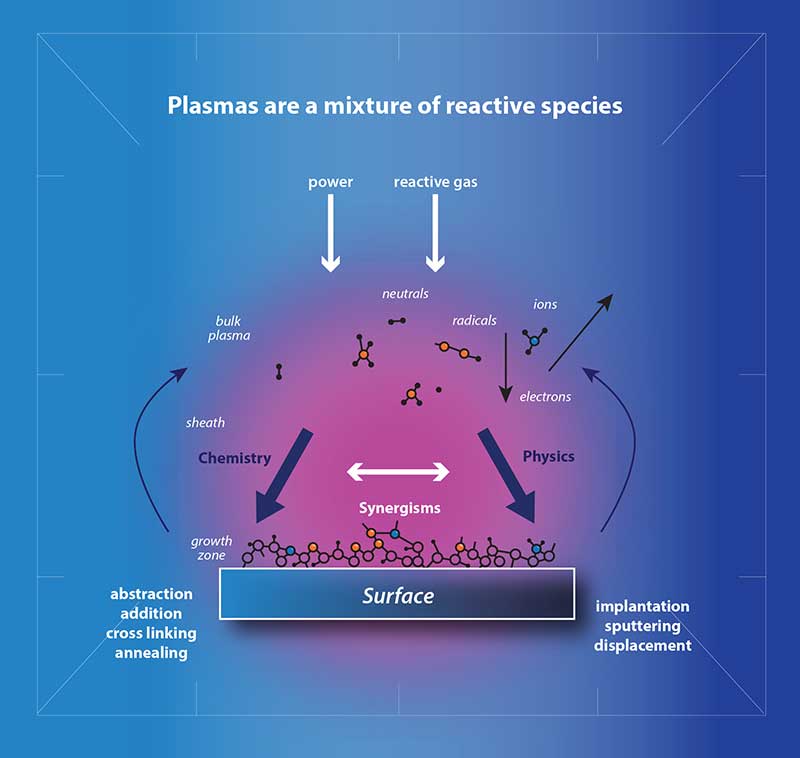 A plasma contains positive ions, electrons, neutral gas atoms or molecules, UV light and also excited gas atoms and molecules, which can carry a large amount of internal energy (plasmas glow because light is emitted as these excited neutral particles relax to a lower energy state). All of these components can interact with the surface during plasma treatment. By choosing the gas mixture, power, pressure etc. we can quite precisely tune, or specify, the effects of the plasma treatment.

How the Plasma Treatment Process works

Plasma treatment can be performed in an evacuated enclosure or chamber. The air is pumped out and a gas is allowed to flow in at low pressure before energy in the form of electrical power is applied. It’s important to note that the plasma treatment is actually a low-temperature process, meaning that heat sensitive materials can be processed quite readily.

Plasma treatment is also performed with atmospheric 'jet' plasmas. Atmospheric plasmas operate at ambient pressure and are best suited to the localised treatment of parts in an in-line process or when combined with a robot.

Plasma cleaning is a proven, effective, economical and environmentally safe method for critical surface preparation. Plasma cleaning with eliminates natural and technical oils and grease at the nano-scale and reduces contamination up to 6 fold when compared with traditional wet cleaning methods, including solvent cleaning residues themselves. Plasma cleaning produces a pristine surface, ready for bonding or further processing, without any harmful waste material.

Ultra-violet light generated in the plasma is very effective in the breaking most organic bonds of surface contaminants. This helps to break apart oils and grease. A second cleaning action is carried out by the energetic oxygen species created in the plasma. These species react with organic contaminants to form mainly water and carbon dioxide which are continuously removed (pumped away) from the chamber during processing.

If the part to be plasma cleaned consists of easily oxidised materials such as silver or copper, inert gases such as argon or helium are used instead. The plasma activated atoms and ions behave like a molecular sandblast and can break down organic contaminants. These contaminants are again vaporised and evacuated from the chamber during processing.

Plasma Cleaning is suitable for:

Plasma surface activation is effective at altering the surface of a polymer by attaching polar (in this case, oxygen containing) chemical groups to it. Many polymers, in particular, polyolefins such as polyethylene and polypropylene, are chemically inert and cannot bond easily to other materials, displaying poor adhesion with inks, paint and glues. The reason for this is the absence of polar and reactive functional groups in their structure.

Plasma surface activation makes many polymers receptive to bonding agents and coatings. Oxygen is usually used as the process gas, however, many plasma activations can also be carried out with just ambient air. Parts remain active for a few minutes up to several months, depending on the particular material that has been plasma treated. Polypropylene for example can still be reprocessed several weeks after treatment.

In plasma coating a nano-scale polymer layer is formed over the entire surface area of an object placed in the plasma. The plasma coating process takes just a few minutes. The coating produced is typically less than 1/100th thickness of a human hair, colourless, odourless and doesn’t effect the look or feel of the material in any way. It is a permanent coating too, being bound to the material surface on an atomic scale.

Plasma coatings are one of the most exciting areas of plasma technology, offering enormous potential to enhance a material’s function and value over a wide range of applications. They deliver two main categories of surface property: totally liquid (water & oil) repellent, or totally wettable.

Liquid monomers are introduced with the plasma feed gas. Monomers are small molecules which will, under the correct conditions, bond together to form polymers. Plasmas create the right conditions at the surface of the material for this to happen both quickly and efficiently. Different monomers are used to produce permanently hydrophobic and hydrophilic surfaces.

Plasma coating is suitable for:

Some of our clients